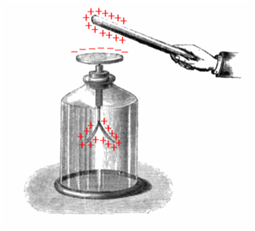 As a science student, you must have heard of the electroscope. So, what is an electroscope? It is an early scientific instrument used to detect the presence of electric charge on a body. We can observe that the object is charged or not by using an electroscope as it shows the divergence of aluminum leaves.

Pith ball electroscope was invented by British schoolmaster and physicist John Canton in 1754. He used a simple thread, which would be attached nearby charged body. This was the first improvement in William gilbert Versorium.

It consists of one or two small balls of a lightweight non-conductive substance, originally a spongy plant material called Pith with silk and linen thread from the insulated stand. Tiberius Cavallo made an electroscope in 1770 with pith balls at the end of silver wires.

What is coulomb’s Law?

Like charges repel and unlike charge attract each other so the arm of the electroscope swings out, as in the electroscope on the right. The larger the charge, the more the arm diverges. To get a more quantitative measure of charge than we can get with an electroscope, here we use Coulomb’s law.

How to make an electroscope

Aim: To check the working of an electroscope

Get lecture notes on electrostatics