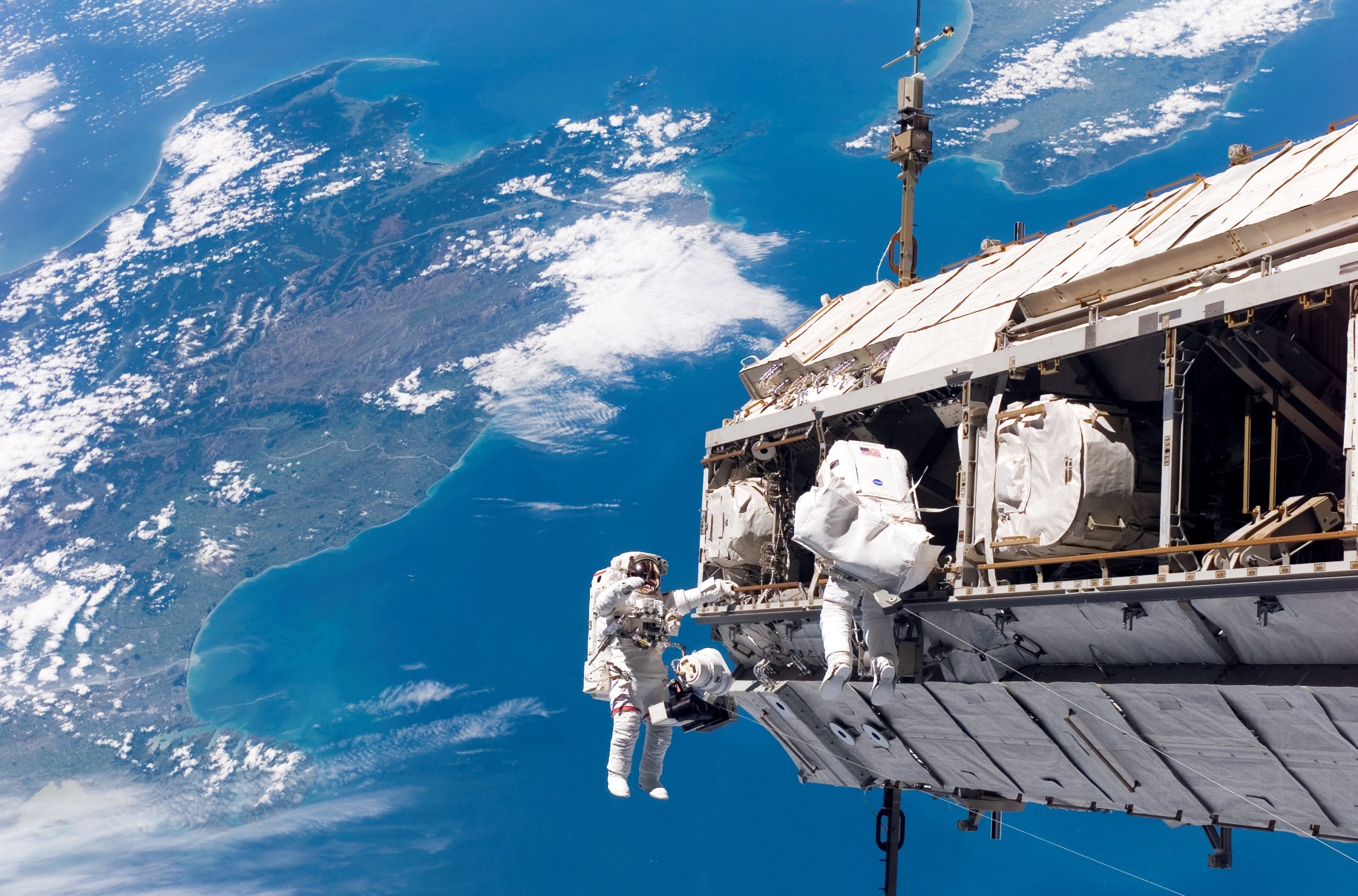 The first person to fly into space was a Russian called Yuri Gagarin. On 12 April 1961, Alan Shepherd became the first American in space, although he didn’t orbit Earth.

Two years after Gagarin’s flight, on 16 June 1963, Valentina Tereshkova became the first woman in space. She spent nearly three days in orbit, circling Earth 48 times during her flight in the Vostok 6 spacecraft.

The first person to leave a spacecraft and go on a spacewalk was a Russian called Alexei Leonov, on 18 March 1965. He was out in space for 12 minutes attached to his spacecraft by a tether to stop him floating away.

The first Moon landing took place on 20 July 1969. Two American astronauts landed the Apollo 11 lunar lander in an area of the Moon called the sea of tranquillity. Neil Armstrong was the first to set foot on the surface, followed by Buzz Aldrin. They spent about two and a half hours outside on the surface, exploring and collecting rocks to take back the Earth.

Since these early pioneers, several astronauts have spent over a year in space. Valeri Polyakov stayed aboard the Mir space station for nearly 438 days (about 14 months) from 1994 to 1995. Others have only spent longer in space if you add together all their different space flights. Sergei Krikalev has had six flights totalling over 800 days (over two years)

Astronauts could not survive outside their spacecraft without a spacesuit. They put it on inside an airlock (airtight chamber) which has two doors, one opening into the spacecraft and the other to the outside. Once inside their suit, they close the inner door, let the air out of the airlock, open the outer door and go outside.

Spacesuits are very bulky because they have to keep astronauts alive and protects them from speeding space dust. They are made of many different layers of material – 14 for a NASA spacesuit. The outer layers are waterproof, fireproof and bulletproof. Underneath are insulting layers that keep the temperature steady and a rip-proof layer that stops the suit from tearing.

The spacesuit must press down on an astronaut’s body. Without this pressure, their bodies would swell and gases would bubble out of their blood like boiling water. On Earth, the air is always pressing down on our bodies, but in space, there is no air. In a spacesuit, the pressure comes from a double layer blown up like a balloon, in the shape of a human body.

Astronauts wear special underwear under their spacesuits to keep them cool. The stretchy material fits closely, covering the whole body. Over 90 meters of thin tubing zig zags through it. Cool water runs through these tubes, carrying heat radiates out into space, cooling the water before it circulates through the tubes again.

Spacesuits have several different parts that all fit together with airtight seals. There are flexible joints in the shoulders, arms and wrists so that the astronauts can move their hand’s arms to work in space. The helmet over the head is made of tough clear plastic to give the astronaut a good view. Under the helmet, a cap with a radio lets the astronauts talk to other astronauts or ground control.

Extravehicular Activity (EVA), often called spacewalks, is when an astronaut leaves the spacecraft to work outside in space. They might be building or repairing a space station, or servicing satellites. Experiments that need to be exposed directly to space are fixed to the outside of a spacecraft and collected during spacewalks.

Spacewalks can last for over eight hours, but mostly take five to eight hours. All this time, astronauts are working on tasks that have been planned and practiced on earth. To keep them going they have a supply of drinking water inside their spacesuits that they can suck through a straw.

Astronauts went on 168 spacewalks to build the ISS. These added upto 1061 hours, more than 44 days. The longest lasted for 8 hours and 56 minutes. The astronauts fitted the parts together and replaced and faulty equipment.

Robot arms on the outside of the shuttle and the ISS have helped during spacewalks. One end is fixed to the spacecraft while the other end can latch onto large pieces of equipment and move them into position, guided by an astronaut inside the spacecraft.