It seems like a completely new definition of a supercluster. Previously Milky Way was placed in the Virgo Supercluster. Tully and colleagues said that it is the appendage of the much larger Laniakea, which is 160 million parsecs across and contains the mass of 100 million billion Suns.

In ancient times, it was believed that Earth is the center of our universe. This was due to the fact that all the observations were done from the Earth itself. It was only after many centuries of continued astronomical observation and calculations that we discovered that the Earth (and all other bodies in the Solar System) actually orbits the Sun.

Similarly, Our solar system is not the center of the milky way but orbits the Milky Way. It is very difficult to assign the exact position of Milky Way. But due to the efforts of astronomers, we now know the position of Sun in the galaxy and Milky way also.

We live in a group of stars known as Milky Way, and our Milky Way is a spiral galaxy, our galaxy probably has just two major spiral arms including a central bar that astronomers are now trying to understand. But, where do our sun and its planets reside within this vast spiral structure? Our galaxy is about 100,000 light-years wide and earth is about 25,000 light-years from the center of the galaxy.

It turns out that we’re not located in one of the Milky Way’s two primary spiral arms. Instead, we’re located in a minor arm of the galaxy. Our local spiral arm is named as the Orion Arm or Orion Spur. It lies between the Sagittarius and Perseus Arms of the Milky Way. Milky Way is really, really big! Not only 100,000–120,000 light-years in diameter 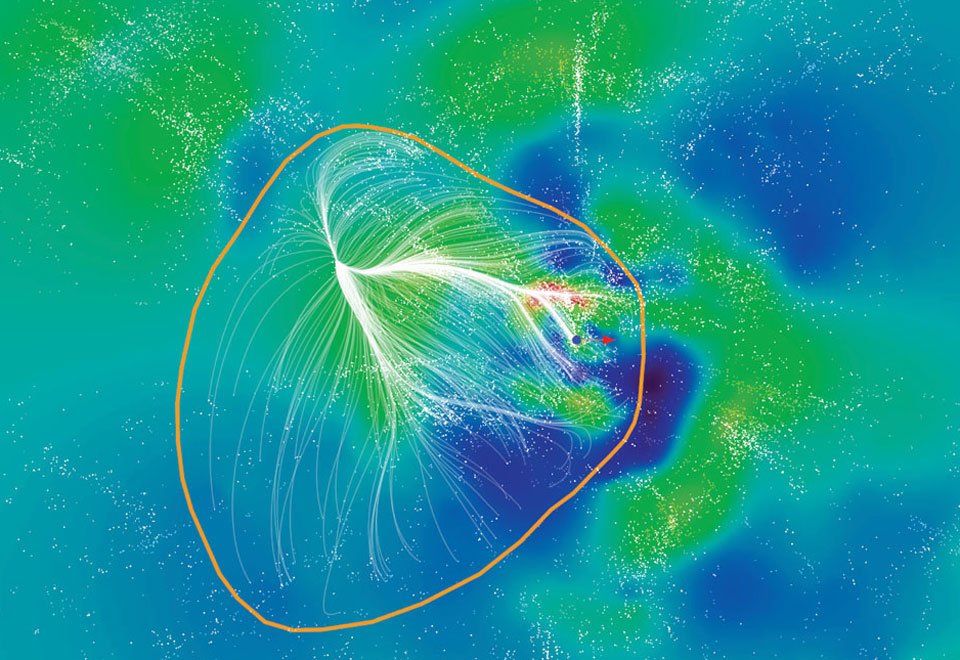 Description: Laniakea Supercluster of galaxies contains thousands of galaxies that includes our Milky Way Galaxy, the Local Group of galaxies, and the entire nearby Virgo Cluster of Galaxies. The colossal supercluster is shown in the above computer-generated visualization, where green areas are rich with white-dot galaxies and white lines indicate motion towards the supercluster center. An outline of Laniakea is given in orange, while the blue dot shows our location. Outside the orange line, galaxies flow into other galactic concentrations. The Laniakea Supercluster spans about 500 million light years and contains about 100,000 times the mass of our Milky Way Galaxy. The discoverers of Laniakea gave it a name that means “immense heaven” in Hawaiian. Source: https://apod.nasa.gov/apod/ap140910.html Author: R. Brent Tully (U. Hawaii) et al., SDvision, DP, CEA/Saclay

The supercluster of galaxies that includes the Milky Way is 100 times bigger in volume and mass than it was previously estimated, a team of astronomers says that they have mapped the enormous region and given it the name Laniakea — Hawaiian for ‘immeasurable heaven’. Galaxies packed in groups called clusters and the densely packed regions are known as supercluster.

But the definition of these massive cosmic structures is not clear. The new study, which is published in Nature Journal, describes a new way to define where one supercluster ends and another begins. A team by Brent Tully, an astronomer at the University of Hawaii in Honolulu, observed the motion of galaxies to infer the gravitational landscape of the local Universe and redraw its map.

To calculate the average rate of cosmic expansion 8000 galaxies data were used. “All the deviations in the data can be accounted from the gravitational pull that the galaxies experience, which comes from mass,” says Tully. The researchers used programming to translate galaxies velocities into a three-dimensional field of galaxy flow and density. 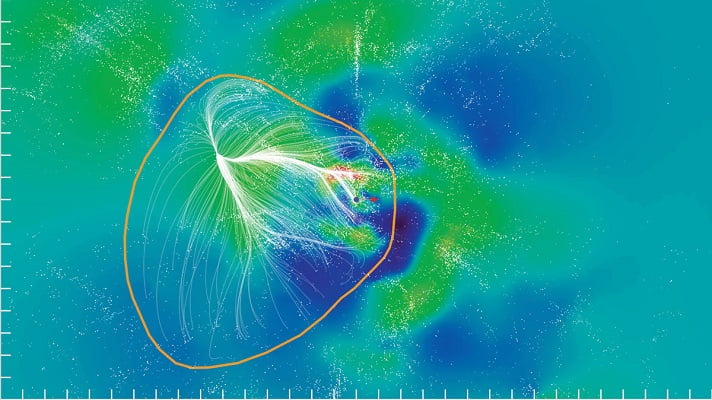 We can’t claim to have a good understanding of cosmology if we cannot explain the motion and velocities of galaxies. This method is only suitable in mapping the location of matter distribution because it helps to build a map of undiscovered regions of the Universe, says, an astrophysicist Paulo Lopes at the Valongo Observatory, (Federal University). It relies on detecting the galaxies influence, rather than seeing them directly.

The motion of galaxies inculcates the distribution of all matter, not just the visible matter in telescopes — including dark matter. The edge of a supercluster is defined as the boundary at which these flow lines diverge. From one side of the line, galaxies flow towards one gravitational centre; beyond it, they flow towards another. Tully said, “It’s like water dividing at a watershed, where the flow is either to the left or right from a height,”. It seems like a completely new definition of a super cluster. Previously Milky Way was placed in the Virgo Supercluster. Tully and colleagues said that it is the appendage of the much larger Laniakea, which is 160 million parsecs across and contains the mass of 100 million billion Suns.

According to Gayoung Chon, an astronomer at the Max Planck Institute for Extraterrestrial Physics Germany, this work is unlikely to be the final word on what a supercluster is. Her team works on a different definition and it is based on that superclusters is a structure that will one day collapse into a single object. According to her estimations, this will not happen to Laniakea, because some of the galaxies within it will recede from one another forever. She said, “This latest method is a very good way to estimate the large-scale structures of the Universe, but it can’t explain what will happen to these superclusters eventually”.

Around the Milky Way, the map seems to be comprehensive over the Universe, but the distant measurements become less accurate, and less numerous, the farther out you go. Actually, more galaxy measurements will improve our universe map and it can help astrophysicist to fully trace what is behind the motion of our local group of galaxies. 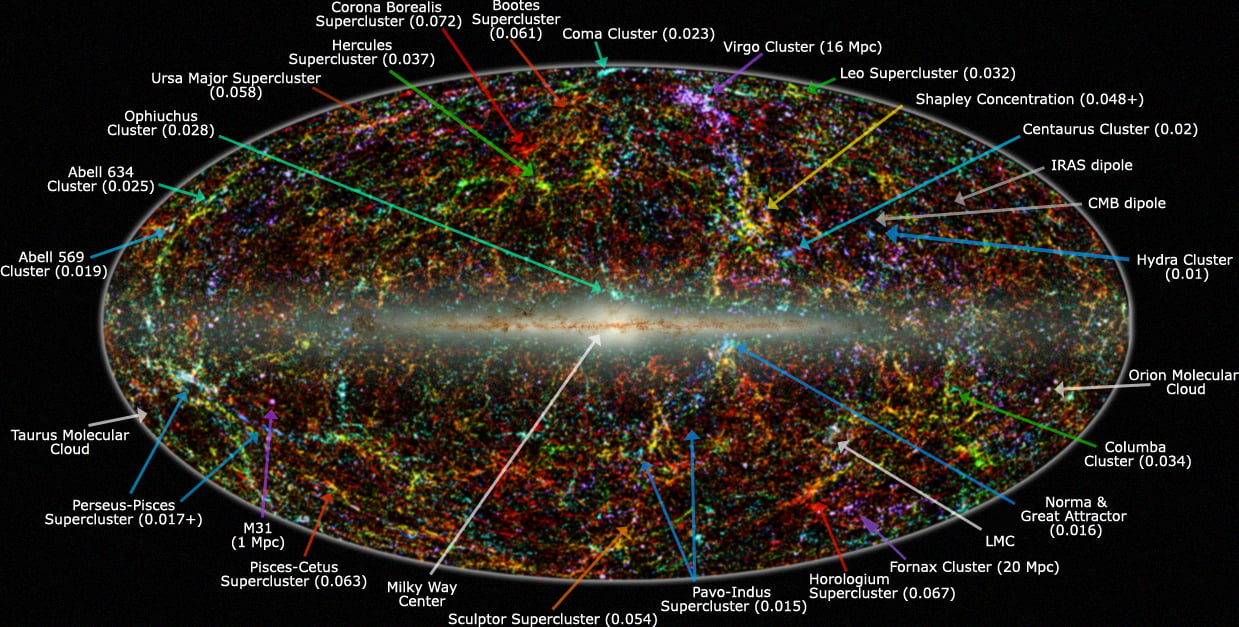 Description: Panoramic view of the entire near-infrared sky reveals the distribution of galaxies beyond the Milky Way. The image is derived from the 2MASS Extended Source Catalog (XSC)—more than 1.5 million galaxies, and the Point Source Catalog (PSC)–nearly 0.5 billion Milky Way stars. The galaxies are colour coded by redshift (numbers in parentheses) obtained from the UGC, CfA, Tully NBGC, LCRS, 2dF, 6dFGS, and SDSS surveys (and from various observations compiled by the NASA Extragalactic Database), or photo-metrically deduced from the K band (2.2 μm). Blue/purple are the nearest sources (z < 0.01) green are at moderate distances (0.01 < z < 0.04) and red are the most distant sources that 2MASS resolves (0.04 < z < 0.1). The map is projected with an equal area Aitoff in the Galactic system (Milky Way at centre). Source: “Large Scale Structure in the Local Universe: The 2MASS Galaxy Catalog”, Jarrett, T.H. 2004, PASA, 21, 396 Author: IPAC/Caltech, by Thomas Jarrett