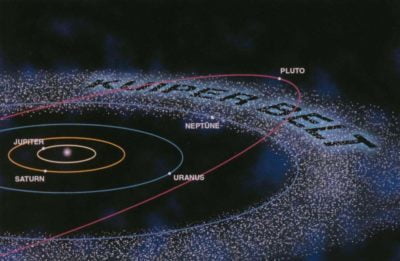 The Kuiper Belt: The issues surrounding the discovery of astrophysical objects can be complex. Sometimes these objects get discovered by chance and on other occasions, their existence is inferred or predicted by astronomers before their eventual discovery. A prediction was made in the year 1943 by an Irish astronomer by the name Kenneth Edgeworth who suggested that a reservoir of comets and larger bodies could exist beyond the planets. Eight years later, another astronomer by the name Gerard Kuiper came up with a somewhat similar prediction. He believed that icy objects just might exist beyond the orbit of Neptune. They both turned out to be right.

What is The Kuiper Belt? According to NASA, the Kuiper Belt is “a disc-shaped region beyond Neptune that extends from about 30 to 55 astronomical units.” One Astronomical Unit (A.U.) is the distance between the Sun and the Earth. This region consists of thousands of icy bodies and billions of comets. Most of these icy bodies are smaller than 100 kilometers in size and they can be even as small as a pebble. Comets from the Kuiper Belt usually take nearly 200 years to orbit the sun. The most crowded section in the belt is between 42 and 48 A.U. Description:The location of the Kuiper Belt at the edge of our solar system
Credit: NASA/JPL-Caltech Source:http://www.8planets.co.uk/kuiper-belt-facts

Sedna, an object that is smaller than Pluto, was discovered in the year 2004. Another object named Eris was discovered in January 2005 by a Palomar Observatory-based team led by Mike Brown. An interesting development followed soon. The International Astronomical Union, in the year 2006 created a new class of objects called dwarf planets. It placed Pluto, Eris and the asteroid Ceres in this category. Pluto is no longer considered a planet but it is probably the best known large object in the Kuiper Belt. Other large Kuiper Belt Objects include Quaoar, Makemake, Haumea, Ixion and Varuna and they are often referred to as Trans-Neptunian objects or TNOs.The well known interplanetary space probe named New Horizons launched by NASA flew by Pluto in 2015. It surveyed a bunch of other Kuiper Belt objects as well.

Formation of The Kuiper Belt: Structure Formation is one of the most intriguing areas in Modern Astrophysics. During the formation of the Solar System, much of the gas, dust, and rocks got pulled together to form the sun and planets. The planets then swept most of the remaining debris into the sun or out of the solar system. But bodies farther out that remained safe from gravitational effects of planets. It is believed that the Kuiper Belt objects are the remnants of these bodies.

Exploration of the Kuiper Belt and the Future of Research: Kuiper Belt Objects are very small and since they are very far from the Earth, spotting them from any ground-based observatory is likely to remain a challenge for some time to come. Luckily, Infrared measurements from NASA’s space-based telescope, Spitzer, have helped in the estimation of the size of some of the large objects in the belt. This belt is believed to be the point of origin for most of the Comets. Probably the most famous of these is the Halley’s Comet, which has been active for the past 16,000–200,000 years. Interestingly, astronomers have found structures similar to the Kuiper Belt around at least nine other stars.

New Horizons and Spitzer have collected a lot of data regarding the Kuiper Belt but it turns out that they’ve barely scratched the surface. We are dependent on just a handful of organizations and techniques to collect data regarding the Solar System. If more nations and organizations were to develop advanced space capabilities, more means of data collection can be arranged and hence more facts can be uncovered. These revelations would surely enhance among other things, our understanding of the formation of the Solar System – or any structure for that matter. So it won’t be wrong to believe that a lot of great breakthroughs in Astrophysics that await us have to do with Kuiper like belts. So Humanity as a whole must aspire to develop greater proficiency in Astronomical methods in order to nurture a new generation of Space Researchers