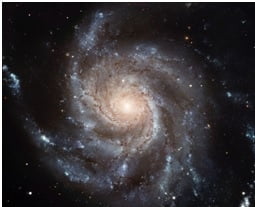 A Black Hole of Gargantuan Proportion at the Centre of Galaxies from this distant vantage point, the galaxy looks like a calm, giant disc of rotating gas. But if you look closely at the picture, the central region looks extremely bright as compared to other part of the galaxy. Why is it so bright ? Is it that a higher concentration of stars give immense brightness to the central region. The answer is not only a resounding ‘NO’ but also points towards the existence of some esoteric objects which we famously call as black hole. Black Holes comes in all sort of flavors, but we are primarily concerned with classification of Black Holes in terms of Mass.

(Solar Mass is a unit which we often encounter in astronomy and it refers to the mass of our sun ). It has been well documented that these stellar black holes form from the collapse of a dying star which has exhausted all it’s fuel.

(3) Supermassive Black Holes – These are probably the most massive black holes which rein in at the center of almost all galaxies. One of the most challenging problem in astronomy is the presence of these supermassive sized black holes at about 800 million years after the Big Bang.

(A smaller black hole takes a longer time as compared to these supermassive black holes).

Astronomers use a fancy name for the system of Supermassive Black Hole and the host galaxy. They refer to it as Active Galactic Nuclei. The name is self explanatory – Active because it’s giving off emission , Nuclei because it’s located at the center of galaxy.

A general question which arises in everyone’s mind is that a black hole is thought to be extremely dark. Because it traps even the light inside it owed to the fact that escape velocity of a black hole is higher then the speed of light. So why is the central region so bright ?

Well the answer is accretion disc. Have you ever wondered that even though the Sun pulls the earth towards itself, the earth never falls into the sun but rather goes around it. The explanation to that is simple – Angular momentum. Since the earth has some initial angular momentum, it just goes around the sun rather than falling into it.

This simple fact has a profound implication for a black hole system. Matter falling into the black hole instead of directly getting sucked into the black hole, goes around it forming a 2 dimensional geometrically thin, optically thick disc which we famously refer to as the ‘accretion disc’. Once matter has settled into the accretion disc, it is acted upon by viscous forces which forces them to lose their angular momentum and begin their final journey into the Black Hole.

This is probably a great time to be alive at least for people interested in Black Hole Physics. Not only do we have conventional telescopes in the electromagnetic frequency to probe the nuts and bolts of AGN physics, we also have gravitational wave observatory to complement our observational results.

As we continue to advance the development of supercomputers, new and probably revolutionary results are expected to come out of it. The world of Black Hole physics needs original thinkers to probe these esoteric object and advance our understanding of them. After all ‘ We are the only ways for the cosmos to know itself’ . (The author is working as a Graduate Teaching Assistant in Astronomy at Creighton University, USA and can be contacted at san77182@creighton.edu )