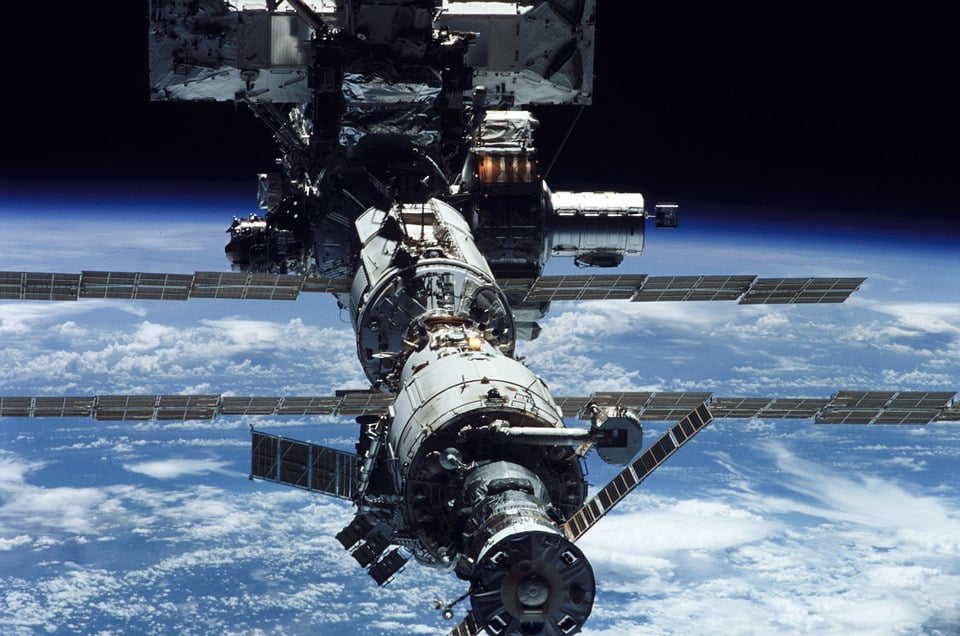 A space station provides a home in space where astronauts can live and work for months at a time. So far, space stations have all orbited earth just a few hundred kilometres above its surface. The first space station to be launched was the Russian Salyut 1 in 1971.

Modern space stations are built in space. The first one to be built in this way was called Mir. It took ten years, from 1986 to 1996, to assemble its six modules. The ISS is four times bigger and took more than 115 space flights and over ten years to build.

The ISS is over 100 meters long, about the length of an American football field. The space occupied by astronauts is as big as a five bedroomed house and has two bathrooms and a gym. It weighs about 450,000 kilograms – as much as 320 cars. Six astronauts make up a full crew. There have been people living on board the ISS since November 2000.

The electricity to run the ISS comes from the sun. eight huge pairs of solar panels, covered with solar cells, change sunlight into electricity. Each pair is about 35 meters long and 11.6 meters wide. Two panels end to end would stretch the width of an American football field. Altogether they make the 75 to 90 kilowatts of power needed to keep the ISS running. The panels twist round to face the sun so they can make more electricity.

The basic feature structure of the ISS is a long beam called a truss that holds the parts together. Attached to it are modules where the astronauts live and work, linked together by nodes. There are docking ports where supplies are unloaded and astronauts enter.

Astronauts currently travel to and from the space station in a Russian Soyuz spacecraft. Supplies are also brought up to the station on regular ferries without crews. Russia, Europe and Japan, as well as two private companies, have all launched unmanned supply spacecraft to the ISS.

A few very rich people have already paid for a trip into space. The first space tourist was an American called Dennis Tito, who flew to the International Space station in a Soyuz spacecraft in 2001. His trip lasted for 8 days and cost $20 million.

Several private companies are now building space planes to take people on short flights into space. SpaceShipTwo is one space plane now being tested. It will not go into orbit but will take six passengers into space for a short time before returning them to earth.

In the future space, hotels could be built in orbit. These would be a similar space station, but visiting tourists instead of working astronauts. One company called Bigelow Aerospace has already launched inflatable spacecraft that could be built into a hotel, but none that people could live in.

Other companies have suggested offering private space flights to land on the moon, but one trip would cost billions of dollars. A cheaper option would be to fly In a huge loop around the moon and back to earth without landing. The passengers would get a close – up view of the moon’s surface and would see the far side that cannot be seen from earth.