Solar System and The Sun 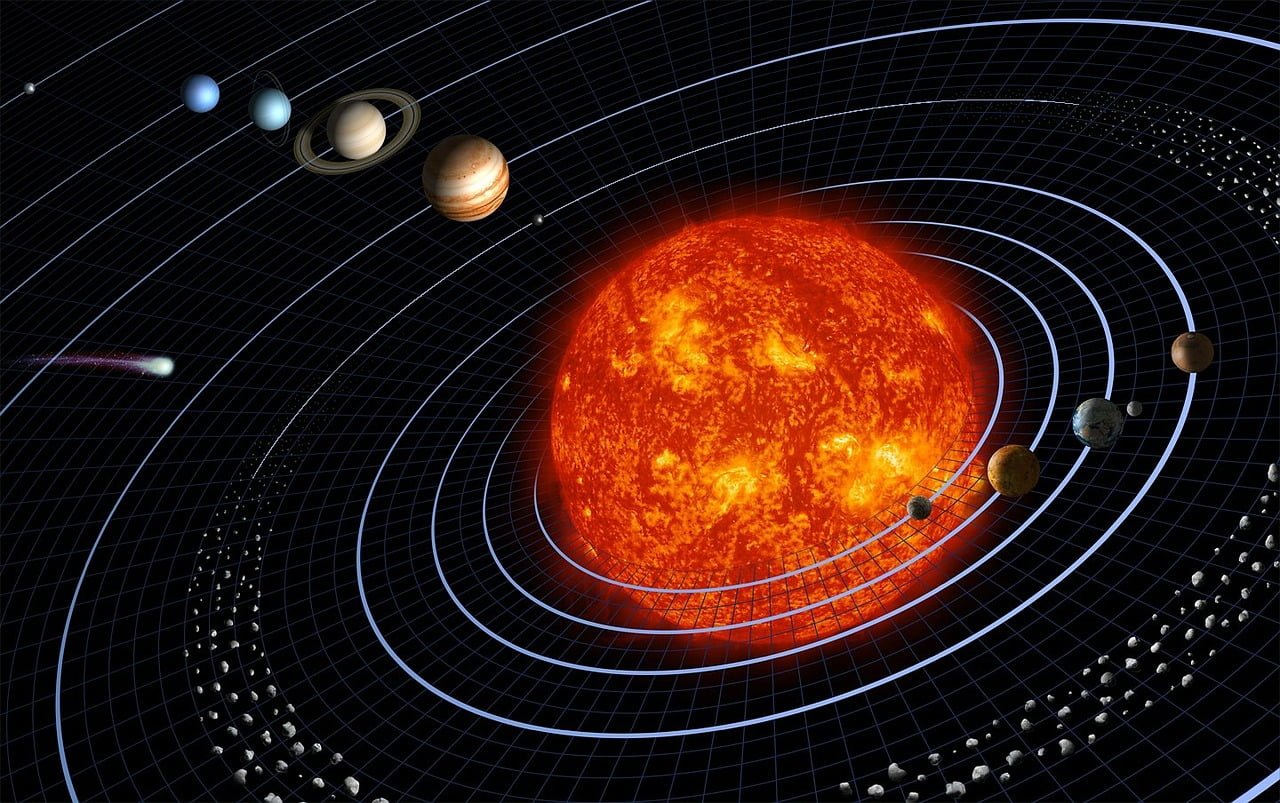 Who are we? Where do we come from? What is life? Are we alone in this Universe?

These are some questions that great religious leaders, philosophers, and Scientists have from time to time attempted to answer. It is hard to answer any of these questions. We don’t have answers, only assertions, and speculations, some of which are supported by empirical evidence. After all, the Universe is not only stranger than we think, but stranger than we can think.

Part 1 – The Solar System and the Sun

One of the most interesting ideas that astrophysicists, cosmologists, and even philosophers are interested in is the process of Structure Formation at different levels, be it at the planetary level, stellar level, Galactic level or at the Cluster level. What makes the Universe so Heterogeneous – except at large scales? What leads to accumulation of matter in specific ways so as to give rise to different kinds of large-scale structures? And most importantly, how are the planets, including our own, formed? What are planets made of?

The formation of our Solar System is a poorly understood phenomenon due to the complexity of the process and lack of adequate data. The latter is purely due to logistical difficulties and economic limitations. Data collected from meteorites help us make some reasonable speculations regarding the age and the initial composition of our Solar System while the data collected from old and young stars reveal other aspects of our sun like its life-cycle. We know from observations that all planets revolve around the sun in almost the same plane and direction about their own axes – although there are exceptions like Venus. It is widely believed that the Solar System collapsed from a rotating cloud of gas and dust. The Gravitational Collapse of Molecular Clouds is also considered responsible for star formation. Rotating disk-like structures is observed at every level – from planetary scales to Galactic scales. They are self-gravitating systems whose radius has contracted and angular velocity has increased so as to keep its angular momentum constant consistent with the conservation principles. Another interesting observation is that while the sun contains 99.8% of the mass of the solar system, it is Jupiter alone that contributes 60% of the Solar System’s angular momentum. Most astronomers speculate that there once existed something called “The Proto-Sun” which rotated far more rapidly than the sun we know. Our sun is an evolved version of this Proto-Sun. Astronomers have also determined that the deeper parts of the sun rotate faster than the outer parts of the sun even though the sun’s interior hasn’t been adequately probed. Any good “Model” of the solar system that deals with its evolution must show how Sun’s rotation slowed down and how its angular momentum got transported outwards, especially to outer planets. Magnetic Torques and Gravitational Torques are invoked to explain the toning down of the angular momentum of the sun and speeding up of the rotation of the outer planets. Astronomers cite the observed Magnetization of the Meteorites to supports this idea.

The outward transfer of Angular Momentum is strongly believed to be related to Chemical Fractionation of the Solar System by the virtue of which, huge variations are observed in the chemical compositions of different planets. There is also a consensus regarding the possibility of an outwardly migrating magnetic field. Consistent with this idea is the observed fact that High-Temperature Condensates, which are not affected by the magnetic field, are mostly found in the inner parts while more volatile constituents, which get dragged by the magnetic field, are usually found outwards.

The Sun is what astronomers call a Main Sequence Star. Main Sequence stars are those which are in a relatively steady state of Hydrogen Burning and have a lifespan of about 10 billion years. Before a young star (after collapsing from a “Proto Stellar Nebulae” stage) reaches the main sequence stage, it has to go through what may be called the “Pre Main-Sequence” stage. Most astronomers bet on the stars that are in the T-Tauri Stage. T-Tauri stars are believed to be still contracting and evolving. They are usually less than a billion years old and their masses are almost similar to the Sun. The Spectra associated with T-Tauri Stars is vast and complex but share similarities with the spectra of Gaseous Nebulae. T-Tauri stars are also associated with Intense Magnetic fields, strong solar winds, and high luminosity.

There are several Solar System Models out there, each with its own strengths and shortcomings. There are also many unanswered questions – even at this age of Rocket Science and Artificial Intelligence. For example, an extremely important question is regarding the final stages of our sun. There are also many unanswered questions about the interior of the Sun. Hopefully, as our technology improves and as our observations become more sophisticated, we will have more answers.

Other important aspects of the Solar System are the phenomenon of planetary formation, condensation, cooling and accretion and composition of planets – especially the Earth.

A common feature among various Solar System Models is that planets formed from particle growth in an initially tenuous gas-dust Nebula. The same spinning disc of dust (called the Solar Nebula) that formed the Sun most likely also led to the formation of all other planets. The Solar Nebula was composed mainly of hydrogen and helium along with some other elements. One of the first people to put forward this idea was V. Safronov.

According to the “Proto-planet Hypothesis,” formation of planets was preceded by the formation of Planetesimals that formed after the merger of several small objects. These planetesimals grew bigger and bigger—big enough to become planets – as small as Mercury or as big as the gas-giant Jupiter. The question that many people attempt to answer is this: What mechanism triggered the collapse of the Nebulae? Some believe that the Nebulae went through a uniform Gravitational collapse while others have suggested the possibility of a Supernova in the Solar neighborhood. Although a Supernova is a low probability event, its possibility is supported by the discovery of micro-diamonds in the cosmic dust.

The spinning disc cooled off, primarily via radiation and this process was probably happened alongside the condensing out of dust particles having refractory elements. These condensates consisted of Silicates, oxides, and Titanates of Calcium and Aluminum. These Condensates also included refractory metals like those in the Platinum group. Volatile materials like Water and Carbon-dioxide condense at around 350 kelvins and planets that contain these were accumulated from materials that condense at this temperature.

According to researchers at the MIT, the timescales for the condensation of gas to dust, of accumulation of dust to planetesimals, and of accretion of planetesimals to planets and moon are not well constrained. The processes responsible for the accumulation of dust and small particles into planetesimals are a matter of death. Two of the most widely believed “Sticking Mechanisms” is Electrostatic Attraction and Vacuum Welding. Greater material accumulation leads to the availability of more planetesimal surface area which further assists in addition of more materials and the process accelerates. When planetesimal size reaches the order of a few dozen kilometers, then gravitational attraction begins to dominate and accretion becomes dominated by it.

Relative velocities between the planetesimals need to be in a specific range. If they are too low, then collisions will become low probability events and planets will not grow whereas if they are too large, then an adequate amount of accumulation won’t take place.

A large amount of energy is expected to be released as planetesimals accrete into moons and planets. Current theories place the time for the accretion of the Earth from 10000 to 10000000 years which are small intervals compared to the age of the solar system. Heating associated with accretion can be calculated by taking into account the kinetic energy of the impacting projectiles, the potential energy of the falling materials and the thermal energy. The heating process is assumed to be adiabatic. In realistic models, scientists will need to account for the latent heats of melting and vaporization too. It is important to consider the role of radiation in ridding the planet of heat. Conduction, although present, plays a somewhat minor role.

More information about the thermal history of a planet requires a study of a process called differentiation and analysis of its internal structures and the radioactive processes taking place within.