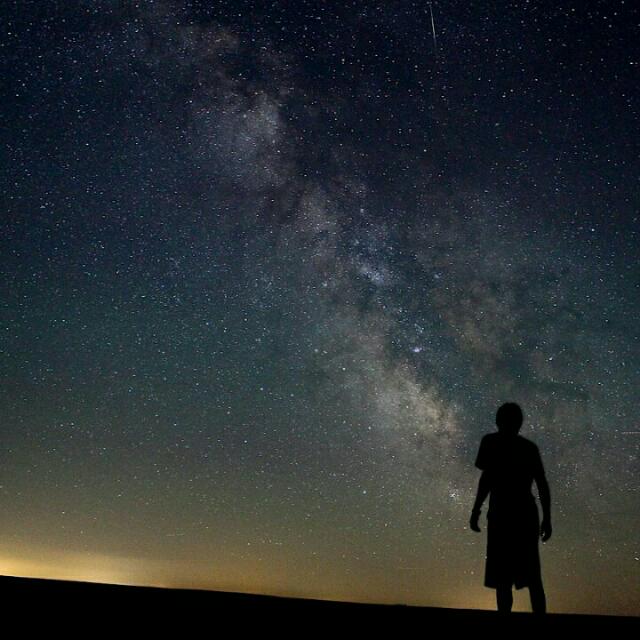 The most remarkable discovery in all of astronomy is that the stars are made of atoms of the same kind as those on the earth.

We have all wondered about the mysterious twinkling stars in the night sky at some point in our life. Although, this curiosity about these primary inhabitants of the universe, diminishes for most of us with the passage of time. Nevertheless, some of us, namely the astronomers, do study stars in order to understand how they are born and evolve with time.

The apparent brightness and position of stars in the sky may seem fixed to the naked eye but they indeed vary from one class to another over their life-span. Apart from mankind’s curiosity about the enigmatic universe, one can ask: why do we need to study stars? Well, the simplest answer would be that our life on earth is very much dependent on the Sun, a star. Sun is at the centre of the solar system and is the fundamental source of energy for life on earth.

The life-cycle of a star begins with the gravitational collapse of massive molecular clouds of dust and gas (main hydrogen) which forms the regions of high matter density, the Nebulae, often called the stellar nurseries or star-forming regions. These high-density regions of Nebulae attract more dust and gas, thus heating the denser regions and form Protostars.

However, it is not possible to directly measure the luminosity and temperature of a star. We can only observe the apparent magnitude of a star which is dependent on the distance. An intrinsically bright star may appear faint because it is far away from us and on the other hand, a relatively faint star may appear bright as it is close to us.

Similarly, the temperature can be understood in terms of colour of the stars, the blue colour represents hotter temperature while the red represents cooler temperatures. Therefore, in practice, the Hertzsprung-Russel diagram is replaced by the colour-magnitude diagram. Main-sequence is the region where stars spend most of their lifetime, as can be seen in Figure 1. Roughly around 90% of stars in our universe belong to the main-sequence, including our Sun.

Figure 1. Hertzsprung-Russel diagram displaying the evolution of stars. (add a reference to the figure/I downloaded from NASA website).

Life-cycle of stars wondered about the mysterious twinkling stars

The evolution of a star from the protostar phase is dependent on its mass. If a protostar could not gain enough mass to fuse hydrogen in its core, it becomes a substellar object called the Brown dwarf. On the other hand, if the masses are sufficient to fuse hydrogen into helium in its core, the protostars form a main-sequence star. The main-sequence stars can have masses up to a couple of hundred solar masses but we will consider only two cases, low-mass (~upto 2 solar mass) and high-mass (above 10 solar mass) stars. 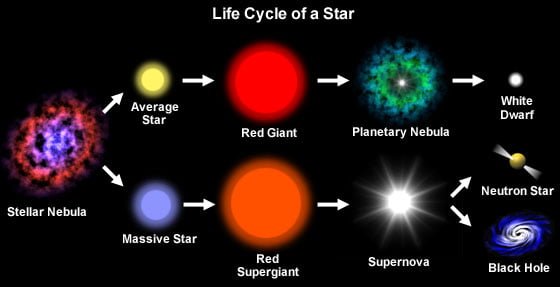 Life-cycle of stars wondered about the mysterious twinkling stars

A low-mass star like our Sun will stay on the main-sequence as long it has hydrogen in its core. Once all the hydrogen is fused, helium core starts contracting, increasing the temperature sufficient enough to fuse helium into carbon. In this phase, the outer layers of stars expand as it becomes cooler, reaching a Red giant phase. Once all the helium is consumed, the outer layers of stars rip apart in the form of gaseous shells leaving a beautiful display of Planetary Nebulae. However, the original core remains intact for the star but becomes cool and faint in the final phase, called the White dwarf. The star remains in this phase for eternity or eventually stops shining, a dead-star or a Black dwarf.

A high-mass star evolves from its main-sequence phase to giant phase rather quickly compared to a low-mass star. Due to high-mass, the star in this phase is called a Red-supergiant and a series of nuclear reactions in its core form heavier elements, such as iron. Once all the fuel is consumed, these stars undergo a violent yet beautiful death as a Supernova explosion. During the Supernovae phase, the explosion is brighter than the entire galaxy itself for a very short time. Such events are known as a transient phenomenon in astronomy.

The core of the Supernovae remnants is left either as a Neutron star or as a Blackhole. Neutron stars are very dense as they have masses equal to a couple of solar masses but the radius of only a few tens of kilometres. If the masses are greater than say three solar mass, the gravity is immensely strong and the core collapses to form a Blackhole. The gravity of these objects is so strong that even the light can not escape from its event horizon.

The Supernova explosion ejects matter into the universe, also in the form of heavier elements like iron. This stardust is accreted by the Nebulae and Protostars and the cycle of birth and death of stars goes on.

At the same time, we all carry these stardust particles within us as the elements of Supernovae explosion help not only make ourselves but also the planet we live in. Therefore, it is only appropriate that Feynman quoted this as the most remarkable discovery in all of astronomy. This article is inspired by a public lecture, “Birth, Life and Death of Stars” delivered by Prof. Marcio Catelan from Chile at the Austrian Embassy in Beijing, China.