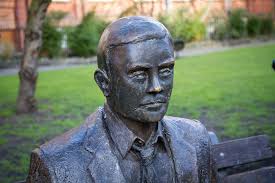 Artificial Intelligence is one of the Key Concept developing now a days. Starting of this Was done by Alan Turing when he first developed decoding Machine Enigma, which decodes Messages send By German President Adolf Hitler during the Second World War.

He was the man ahead of his time. At that time when Machine was not in much , question -Is Machine can Think? He comes to this concept by a famous Parlor game in which an interrogator tries to identify man and Woman by their answer without seeing them. From there he comes to the idea that is it possible to identify the machine and man if both are asking certain questions? The test was introduced by Turing in his paper, “Computing Machinery and Intelligence” while working at the University of Manchester.

In 1966, Joseph Weizenbaum created a program which appeared to pass the Turing test named ELIZA, worked by examining a user’s typed comments for keywords. In one of the test people said that it is very hard to convince that it is ELIZA not Human. In 1972 Joseph Weizenbaum created PARRY a program described as “ELIZA with attitude”. After that a lot of people try different developments which are described in the part.

Now the question comes what is Artificial Intelligence Is?  So Artificial Intelligent is nothing but a concept of making a computer or a software think like intelligently, Same as that of Humans. AI currently encompasses a huge variety of subfields, from general-purpose areas such as perception and logical reasoning to specific tasks such as playing chess, proving mathematical theorems, writing poetry, and diagnosing diseases. Often, scientists in other fields move gradually into artificial intelligence, where they find the tools and vocabulary to systematize and automate the intellectual tasks on which they have been working all their lives.

If we are going to say that a given program thinks like a human, we must have some way of determining how humans think. We need to get inside the actual workings of human minds. There are two ways to do this: through introspection—trying to catch our own thoughts as they go by—or through psychological experiments. Once we have a sufficiently precise theory of the mind, it becomes possible to express the theory as a computer program. If the program’s input/output and timing behaviour matches human behaviour, that is evidence that some of the program’s mechanisms may also be operating in humans. So this approach works on the cognition principle.

2.  The laws of thought approach-

The Greek philosopher Aristotle was one of the first to attempt to codify “right thinking,” that is, irrefutable reasoning processes. So according to this approach we see the in which direction the reasoning is going of a particular software or person in a certain command.

In the last philosophy and Artificial Intelligent are the same. It’s  just introduce the Philosophy in Machines.

Siri  is a computer program that works as an intelligent personal assistant and knowledge navigator, part of Apple iOS, macOS operating systems. On June 13, 2013, Apple announced that Siri would have a gender option, meaning that one can choose if Siri will sound male or female, with the release of iOS 7. It was first AI Representative App for any ios system.

It is an intelligent personal assistant created by Microsoft for Windows 10, Windows 10 Mobile, Windows Phone 8.1.Cortana can set reminders, recognize natural voice without the requirement for keyboard input, and answer questions using information from the Bing search engine.can solve mathematical equations, convert units of measurement etc. Cortana Analytics Suite to enable businesses to get things done in more helpful, proactive, and natural ways. So it has a lot of things which it can Perform only by giving commands.

These are the chips on which AI can be processed recently developed by MIT Researchers. Current mobile processing architectures aren’t well-suited for the computer vision and deep neural network workloads, given the fundamental challenges in balancing performance, heat dissipation and power. This chips can perform AI on their interface. These have certain Improvements like an increase in the number of programmable vector-processors, and additional dedicated hardware accelerators. As a Vision Processing Unit (VPU) System-on-Chip (SoC), It  has a software-controlled, multi-core, multi-ported memory subsystem and caches which can be configured to allow a large range of workloads.

Nowadays many spheres of activity are done by machines like investigating the progress of climate change also computers are running the world’s finances. Turing would have danced for joy in 1997 when Deep Blue defeated world champion Gary Kasparov at chess. Apple recently purchased Perceptio, a startup developing AI possibilities for phones. Also Panasonic Start its Mobivation Movement to launch the AI Smartphone in market by next year in India. So it’s not far when we will be able to talk the things on which are we working now. All this became possible only with one question Alan Turing ask “ Can Machine think”.

By: Goyal
surender.goyal92@gmail.com From IISC Bangalore